Saw an old picture. Decided to gather several together. I call this leadership and respect – and love. Love for others. Love for community. Love for differences.

And how about this marvelous New Yorker magazine cover? 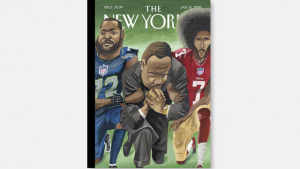 Love. Leadership. Courage. Respect. Justice. Speaking out. Taking risks to care for others and everyone.

How I wish the world was…

“Patriotism is to nationalism as dienity is to barbarism.”

“Women dancing, women cursing, women running for president and not apologizing – what is the world  coming to?”

“How Ralph Northam and others can repent of America’s original sin,” The Reverand William J. Barber II

“…Virginia Gov. Ralph Northam’s social life…included parties where white people dressed in blackface…implicating not only a few bad apples but also white elites across social and ideological lines. To African Americans who survived the status quo of racism, this is hardly a surprise. But it does raise again…the question of what it means to repent of America’s racist past and pursue a more perfect union.”

This is a beautiful and deeply sad article.

I wish I could mandate that everyone has to read Ta-Nahsi Coates’ book  Between the World and Me.

Making change in the world

Imagine if lots of nonprofits followed what California Green Academy (CalGreen) does to operate its business. (And gosh, just imagine if for-profits behaved this way??!!! WOW!!!!)

I’ll turn back to the nonprofit sector. And the wonderful nonprofits fighting so hard for justice and good ROI and and and….

Hey you nonprofits….Take a look at the Triple Bottom Line... The triple bottom line… an accounting framework with 3 parts: social, environmental (ecological), and financial. And systems thinking. YES! Systems thinking. Read all about it in my book Strategic Fund Development: Building Profitable Relationships That Last, 3rd edition. (There’s so much more to fundraising than just the asking part…than just the fundraising part…There’s the systems thinking part!!!

Why bother to write our own policies for our nonprofits? Our nonprofits can adopt these UN policies – or adopt with some edits. Hey nonprofits worldwide… Let’s be leaders. We can be leaders for the for-profit sector, too.

Hey. Here’s a question: Has your country (or mine) agreed to these – and ratified them by your country’s (or my country’s) legislature/congress/appropriate body?

Imagine showing this video every single year …. for your staff and for your board. Exploring questions. Then talking about the implications and applications for you as individuals, those you serve, and and and …

Better yet, imagine actually doing this live. And sure, staff and board members together.

And how about engaging donors in this? Hmmmm……

Learn about why and how and good and bad and and and on the Internet.

And check out the workshop at 2018 AFP Congress, too.

I was listening to Bob Dylan’s Hurricane the other day.

So I looked up the story on Wikipedia…Rubin Carter…20 years in prison for a crime that he did NOT commit.

No matter that LBJ worked hard to get the Civil Rights Legislation passed back in 1964 and 1965. No matter that Barack Obama was President for 2 terms.

The day before listening to Bobby sing Hurricane… Tom and I watched the 2017 movie Marshall about Thurgood Marshall and his 1940 case in Bridgeport, CT.

Such sadness and anger about racism. Such admiration for those who fought and fight and will fight. Forever.

Larisa is talking about Judge Brett Kavanagh and on and on…   Thank you, Larisa, for allowing me to put this in my blog.

I think I understand now why I am upset about this case. I tried to sleep last night and all I kept thinking is why are they trying to “ram him” through despite the majority of the country and the majority of women saying “no,” and “please stop,” and “wait”… and in that very question I found the answer. It was so simple and so alarming.

They are literally playing out out on the national stage and in real time what it feels like to be overpowered. They won’t take no for an answer. They won’t listen or slow down. They won’t stop. The more we say no, the more angry they get. The more we ask them to stop, the more entitled they feel. This is, I think, what is affecting me and countless other women.

We are being overpowered despite us being in the majority and asking rightfull that they stop or wait. They are saying no and the more we beg, the more aggressive they are getting. Until finally, they play on “ramming” through his nomination while we are supposed to just take it.

This is why I am upset.

Thank you, again, Larisa. This is deeply caring and deeply sad to me. Thank you.

I use them in my classes at SMUMN – where I teach in the masters program in Philanthropy and Development.

If I were on staff at an institution (instead of being a consultant) – I’d insist all staff watch these together….And then talk.

HEY! What a great way to start a board meeting…periodically watching something like this and talking about the implications for your clients, your donors, your organization, the community, and on and on and on…

EVERY SINGLE ONE OF THESE MARVELOUS VIDEOS is about the work that you and I do. The work that pretty much any human being does.

EVERY SINGLE ONE OF THESE INSIGHTFUL VIDEOS is about life…your life and mine, and the beneficiaries of our work and the volunteers helping in our organizations, serving on boards.

AND EVERY SINGLE ONE OF THESE HUMAN AND HUMANE VIDEOS is about our donors.

Watch these. Share these. Explore the implications. Learn. Make change. Do and be better.

Ahmen, “Batman of Social Impact.” Nonprofit leader by day and hip-hop artist by night. His marvelous opening for IFC 2017. I was there. I took the knee with my hand in a fist.[ https://twitter.com/TheResAlliance?lang=en]

#likeagirl “What does it mean to do something like a girl.” [https://www.youtube.com/watch?v=XjJQBjWYDTs]

Ash Beckham: We’re all hiding something – coming out of the closet. [https://www.youtube.com/watch?v=kSR4xuU07sc]

“What is Privilege?” The privilege walk is one of the most insightful, saddening things I’ve ever seen or experienced. Better than watching it, you can actually do it. [https://www.youtube.com/watch?v=hD5f8GuNuGQ]

From my archives. I have archives? #2

But not really. Yes, the good news is things like the #MeToo! movement. Sadly, the opposite of that is the leadership of our national government and our president and…

How weird. Within 60 seconds of posting this morning’s blog – “Racism and the United States” – I read Charles Blow’s “Yes, All Men,” in the New York Times.

So here goes…. Again and forever until we have equity for all!

“Sexism” … A bit of an easier word than “misogyny.” But are they different? Not in action. Socialized and institutionalized behaviors. Even women can be misogynistic.

Check out Wikipedia:
Sociologist Allan G. Johnson says, “misogyny is a cultural attitude of hatred for females because they are female…misogyny…is a central part of sexist prejudice and ideology and, as such, is an important basis for the oppression of females in male-dominated societies… Misogyny functions as an ideology or belief system that has accompanied patriarchal, or male-dominated societies for thousands of years and continues to place women in subordinate positions with limited access to power and decision making.”

Yes, that still happens. Yes, the U.S. is that kind of society. Did you know that in 2014 (the original date of this blog), the U.S. had a larger gender gap than 22 other countries? In 2014,  the U.S. ranked 83rd in the world in the number of women in elective office at the federal level? How does the U.S. rank today, according to the 2017 World Economic Forum Gender Gap? #96 in Political Empowerment. #82 in Health and Survival. #1 in Educational Attainment. And #19 in Economic Participation and Opportunity.

Maybe you want to check the report annually? Visit the World Economic Forum. Maybe we should all know that the gender gap is actually getting wider!!

The gender gap. Sexism. Misogyny. In the U.S. In many countries. In various religions. Part of various political philosophies.

“I believe it’s very important for everyone to be a feminist.” That’s what Mr. Blow’s son said to him… And that’s how Blow began his op-ed piece on June 1, 2014.

Blow continues with: “Yes, we should all be feminists, but too often we believe that the plight of the oppressed is solely the business of the oppressed, and that the society in which that oppression is born and grows and the role of the oppressors and beneficiaries are all somehow subordinate.”

But that’s just plain wrong, as Blow notes. “Fighting female objectification and discrimination and violence against women isn’t simply the job of women; it must also be the pursuit of men.  Only when men learn to recognize misogyny will we be able to rid the world of it.” (Actually, fighting any oppression is the responsibility of everyone, not just the oppressed, not just the marginalized. White people marched with Martin Luther King, Jr. Straight people march with the LGBTQ community. Men march with women.)

So are you a feminist? I’m so tired of hearing women and men say “Well, I just don’t identify with that word but…” Again, from Wikipedia: “Feminism is a collection of movements and ideologies aimed at defining, establishing, and defending equal political, economic, cultural, and social rights for women. This includes seeking to establish equal opportunities for women in education and employment. A feminist advocates for or supports the rights and equality of women.”

A feminist advocates and supports the rights and equality of women, equity for women. What’s not to like? Cut the simplistic crap and the word games. Are you a feminist? Do you believe in equity – for women and men and people of color and homosexuals and heterosexuals and and… ?

(Guess what I just learned? Charles Fourier, a Utopian Socialist and French philosopher, apparently invented the word “feminism” in 1837. And the terms appeared in France and the Netherlands in 1872.)

By the way, philanthropy and the nonprofit/NGO sector are enmeshed in this same moral dilemma of inequity and power.

You think I might have been pissed in 2014? Just imagine how I feel now, March 2018. At some point, I may post a list of resources re: gender equity — in my Free Download Library. Let me know if you’d find that useful.

Would MLK, Jr. be ashamed?

So here are things I’m thinking about and seeing……..[And yes, this is long. Mostly just quotations. I collect quotes to inspire me, to help me remember and to fight and speak out.]

Some favorite MLK quotes – because I collect social justice quotations. And I believe these are all still true today.

Some of my other favorite social justice quotations. I think MLK would have liked these. And I believe that these are all still true today.

Would MLK, Jr. be as ashamed of us as I am? I think he’d be deeply deeply sad. And I think he’d be hopeful and still fighting. “There may be times when we are powerless to prevent injustice. But there must never be a time when we fail to protest.” (Father Dan Berrigan)

I’m still fighting. But the moral injury (a definition of PTSD) I’m feeling (and so are so many others) … is huge. I feel so sad and so angry so much and so often. I cannot allow this to happen to me:“Cautious, careful people always casting about to preserve their reputations…can never bring about a reform. Those who are really in earnest must be willing to be anything or nothing in the world’s estimation, and publicly avow their sympathies with despised and persecuted ideas and their advocates, and bear the consequences.” (Susan B. Anthony)

I must remember what Jessie de la Cruz said. Jessie was a retired farmworker talking of the days before the founding of the United Farm Workers. “La esperanza muere últimata – Hope dies last.”

Get non-profit resources in your inbox